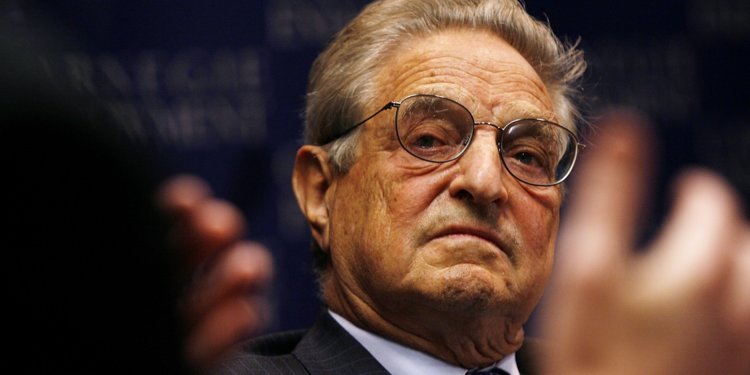 Why Are We Harboring a Enemy?

Under Federal law, domestic enemies lose their citizenship when they declare allegiance to a foreign power or government.

So why is dual-citizen George Soros allowed to enjoy the benefits of U.S. citizenship at the same time he:

…In a 2011 open letter to internationalist E.U. potentates, Soros wailed, “As concerned Europeans we urge Eurozone leaders to unite” and seize control of banking and the military.

Under Federal law you cannot be both a “European” and an American.

He can be legally stripped of his U.S. citizenship and…HE CAN BEDEPORTEDFOR HIS ANTI-AMERICAN ACTIVITIES!So why is our government allowing him to maintain his citizenship, make profits here and avoid paying E.U. and Hungarian taxes – cash he then uses to attack our national sovereignty, lobby for open borders and demand gun confiscation?

It’s time to shut down Soros’ reprehensible multi-billion dollar scheme to use his U.S. citizenship to fund attacks on our America!

With his citizenship revoked, this anti-American slug can beDEPORTEDand banned from ever setting foot again on U.S. soil!

We need to mount a massive campaign to alert President Trump and his Cabinet to the dangers of harboring this anti-American extremist now, before he does any more damage to America.

And once it is on President Trump’s radar, we must fight back against:

The Democrat politicians who need Soros’ money for their campaigns…and the anti-American gazillionaire Soros himself who is more than willing touse his vast fortune to radically change our nation.

Even if President Trump sees the light and agrees with us on deporting George Soros, his aides will tell him he should spend his time on other issues.

He won’t take action unless we make it clear this is a PRIORITY!

We must be PERSISTENT!

I plan to prepare an all-out radio, TV and media blitz, because you and I must defend ourselves from the massive retaliation that we know will come from Soros and his leftist attack dogs.

Forcing the U.S. government to deport George Soros is a MASSIVE undertaking.

My legal advisors tell me it’s never been done before.

But Soros is such a clear and present danger to our national sovereignty it must be done!

He is using his U.S. citizenship to shelter his illicit profits and operate his anti-American groups.

And his U.S. citizenship inviolation of Federal law!

George Soros has repeatedly declared his loyalty to the U.N. and the E.U., and demanded we bow down to them…

…direct affront to the Citizenship Oath that every naturalized citizen must take:

I hereby declare, on oath, that I absolutely and entirely renounce and abjure all allegiance and fidelity to any foreign prince, potentate, state, or sovereignty, of whom or which I have heretofore been a subject or citizen; that I will support and defend the Constitution and laws of the United States of America

Soros is literally joining with European socialists and Communists to pledge his allegiance to an anti-American transnational government.

And as you MAY NOT KNOW, he’s doing more than just sending letters that disqualify him from being a U.S. citizen.

How can a Hungarian citizen legally do this?He can’t.

Unless he thought ahead and also acquired U.S. citizenship.

George Soros is using his U.S. citizenship as a legal loophole that allows him to bankroll efforts to put our government in the hands of foreign enemies.

Under Federal law, that’s indisputable grounds for revocation of citizenship – and deportation.

George Soros is laughing at America.

He’s hijacking our government, interfering in our politics and actively promoting voter fraud.

That’s illegal and he MUST be held accountable.

He must be permanently banned from U.S. politics, and from the United States itself!

TAB EDITOR COMMENT; well, damn good info on George Soros and what he’s done and doing. The like of him, those that work for him, those that support him and his tactics should also be deported with him. The ‘Birds of a Feather’ rule comes into play. Those who GIVE AID AND COMFORT TO OUR ENEMIES should be deported …Pronto! Since the Federal government thru it’s co-business Telephone Corporations, the FBI, the CIA, and any other entity/corporation ‘LISTENING AND RECORDING PHONE CALLS …ENTITY’ …all ready has the ‘Dirt’ on Soros and his associates, that should be transmitted to the Military via Trump’s executive authority to have Soros and collaborators picked up/arrested and transported to Hungary via military transport. This type of an action would be monumental in DRAINING THE SWAMP!

P.S.; this so-called article was a ‘plea’ by Steve Eichler, CEO, Tea Party, for the reader(s) to sign a petition to be delivered to Trump to hopefully get Trump to do something, while at the same time ASKING FOR DONATIONS to the TEA PARTY …and most likely, like Bill and Hillary’s Foundation, that received MILLIONS of dollars through contributions and donations, only paid out 5% for the purpose of the foundation.I smell a rat and I perceive that the Steve as CEO of the Tea Party will take out his healthy percentage, pay the expenses for the Tea Party, etc., and probably send a few hundred thousand to Trump …while at the same time, mind you, the Federal government sends over 450 Billions dollars in FOREIGN AID to countries all over the Globe and some are our enemies!And the people having to struggle just to pay their bills and debts with ‘Monopoly Money® …never acquiring ‘Title’ to what they so-called bought (the car, house, land, the shirt on their back, etc.), and being OVER-TAXED as well illegally taxed by the IRS …and yet, SteveEichler and the likes have the gall to ask the America people to fund the activities of political organizations for the above matter and/or to ensure the successful mid-term elections taking place inside the ‘Matrix’ (the corporate world) all the while the people are being raped, pillaged and plundered by those in so-called government. I shall not tender any ‘shekels’ for folly of permitting the current conditions to exist in America …as ‘they’ all had the Right, the Power and the Authority, by and through their ‘Oath of office’ to never have let it happen in the first place. Get it?

Share7Tweet5
No Result
View All Result