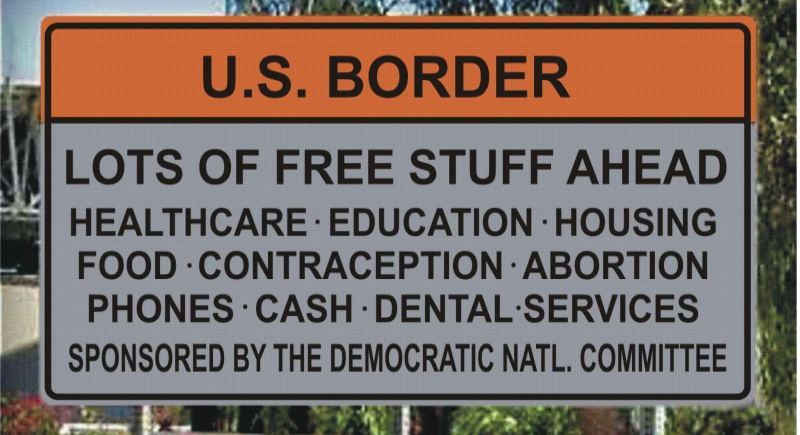 Gavin Newsom is running for Governor in California, and he’s already bragging about his plans to drive the state into financial oblivion. The gubernatorial candidate just announced his plans to launch a universal healthcare program for illegal immigrants state-wide. In any other state, such an idea might send would-be voters running for the hills, but on the Left Coast, it seems anything goes.

In an interviewonPod Save America, Newsom recalled his time as the Mayor of San Francisco, a once-beautiful city that now more closely resembles a poorly kept port-a-potty. The current state of SF is nothing to write home about,but Newsom would like to expand the city’s universal healthcare policy state-wide.

“The only way in a state whose population’s larger than 163 nations — California’s economy is larger than all but four nations, the fifth largest economy — to approximate a strategy for universal health care is with the support and concurrence of the governor, and that’s frankly — it’s not an indictment — it’s just what’s been missing in the past,” Newsom contended.

“I did universal health care when I was mayor, fully implemented regardless pre-existing condition, ability to pay and regardless of your immigration status. San Francisco is the only universal health-care plan for all undocumented residents in America, very proud of that, and we proved it can be done without bankrupting in the city. I’d like to see that we can extend that to the rest of the state,” he added.

California is a financial sinkhole

Whether or not the city was “bankrupted” is still up for debate. According toa March 2018 report, San Francisco is $10 billion in debt — not exactly the shining beacon of financial stability that Newsom makes it out to be. The trend of rising debts in SF is not new; in 2016,Truth in Accountingreportedthat the city was $16,400 in debtper taxpayer.

“When ranked amongst the 20 most populous cities in the U.S., San Francisco has the fifth worst taxpayer burden,” the organization reports further.

Sheila Weinberg, Founder and CEO of Truth in Accounting, commented, “If San Francisco doesn’t recognize its alarming entitlement obligations then the burden will be passed on to taxpayers.Our analysis of the city’s financial reports indicate that the city continues to hide $509 million in pension debt despite the new accounting rule.”

State Data Labconfirmed the “sinkhole” status of San Francisco earlier this year when the 2016 financial data for the city was released. The estimates indicate San Francisco taxpayers would need to pay the city $27,500eachto erase the city’s mounting debt. Worse, the report indicates that the city is hiding its debts by using outdated pension data and “obscuring” healthcare liabilities.

In addition to crushing debt, thecity streets are filled with human waste. All told, the San Francisco of today is not a pretty picture.

And Newsom would like to expandthisto the rest of the state?

Asa report from 2017 shows, illegal immigration is already costing the United States a pretty penny. In 2017, illegals cost America a record-breaking $135 billion. Between the free medical care they already receive, along with education, other government benefits and the cost of enforcing immigration laws — it’s no surprise illegal immigration is becoming a burden that is simply too heavy for the tax-paying citizens of the U.S. to bear.

While pro-illegal activists are quick to say that illegals pay taxes, the IRS reports it collected just $19 billion from illegal immigrants — a drop in the bucket compared to the $116 billion in slack American citizens are forced to pick up.

In just two years, Los Angeles countyspent $1.3 billion on welfare paymentsfor illegal immigrants. The delusional Left sees nothing wrong with giving American tax dollars to non-citizens — no matter what it costs their constituents. It is no wonderCalifornia is collapsing.

TAB Editor comment; so there you have folks …the powers that be that are bringing in these illegal immigrants is costing well over 135 Billion so-called dollars per year, not counting what the States are paying out …but actually it’s what the people are paying out via TAXES …and telling you to suck it up cause we can’t let the Democrats win …as they tell you it’s raining while their peeing on your leg and then urging you to VOTE …TO MAKE AMERICAN GREAT AGAIN …while it’s being torn apart from within!!!